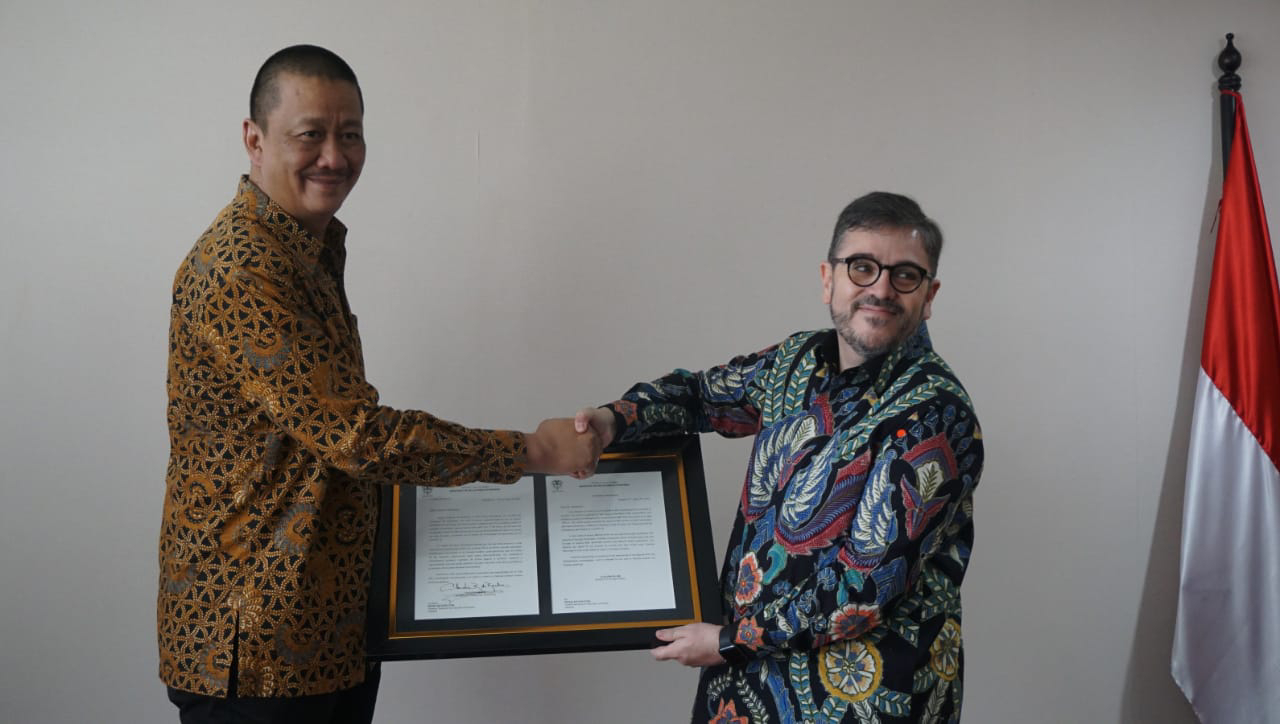 Colombia Government Appreciation for Garuda Indonesia Jakarta
Director of Garuda Indonesia Irfan Sebuahutra received a "letter of appreciation" from Colombia's Foreign Minister Claudia Blum delivered directly by Colombia Ambassador to Indonesia Juan Camilo Valencia Gonzalez, the appreciation was conveyed for Garuda Indonesia's support for flight services. With the help of Garuda Indonesia flying its citizens back to their country, the Government of Colombia through the Ambassador to Indonesia, Juan Camilo Valencia Gonzalez gave a letter of appreciation from Colombian Foreign Minister Claudia Blum to Garuda Indonesia President Director Irfan Sebuahutra. According to Camilo there is no other way for Colombians to return to their country without using Garuda Indonesia, the mythological bird that accompanies the Indonesian shield, which is also the most important airline in the country. Garuda Indonesia became a vehicle for 366 Colombians in 19 different countries on 4 continents to return to their countries "The results of my meeting with Mr. Irfan to achieve results that seem impossible. We must find the best route to help the return of our compatriots who are trapped in Thailand, Malaysia, Hong Kong, Singapore, Australia, Indonesia, India and various countries in Europe and Africa, "in his statement Thursday (01/07). But, he added, the results show that for Colombia and Indonesia, there is nothing that must be addressed. This is a perfect and unprecedented operation, it is proudly covered by the Colombian media. Dozens of media were in Bogotá on May 17, at El Dorado International Airport, to welcome the first passenger plane from Garuda Indonesia to his country. According to Camilo, for this the country is very grateful to the Government of Indonesia and Garuda Indonesia. Because not only professionals with good quality who are willing to support the needs of their citizens to return to Colombia, but also as human beings who understand the suffering of their citizens and give everything they have so that today they can be beside their family. "For that, as a thank you to the Colombian Government, I delivered a letter of appreciation from the Colombian Foreign Minister Claudia Blum to Mr. Irfan for Garuda Indonesia's support for the repatriation flight services of Colombian Citizens," he said.
Humanitarian Mission Meanwhile, Irfan said on behalf of the Government of Indonesia he thanked the appreciation, and all this was done was a humanitarian mission because many citizens in the world who did not return to their country due to Pademi Covid 19. "We are grateful to be able to take part in strengthening harmonious relations between Indonesia and Colombia for the Repatriation Flight of Colombians. We believe that synergy for mutual cooperation is very important during this challenging time," he said.
Irfan also said that Garuda Indonesia realized during this difficult situation because of the Covid-19 pandemic, taking care of each other was the right thing to do at the moment with the hope that the situation would recover soon. "And through this collaborative repatriation flight, we have so far flown Colombian nationals from Bangkok and Melbourne to Jakarta and sent 366 Colombian citizens back from Jakarta," he concluded. Mza (sham)
Bagikan berita ini ke yang lain